Okay, it's inevitable that, over the coming months, the Republicans are going to constantly refer to the Democratic Senate's rejection of the nomination of the right wing Robert Bork as an example of partisan judicial decisions made by Democrats.  I think we had better deal with the facts of the career of Bork, before the Republicans get too much momentum going on this one. 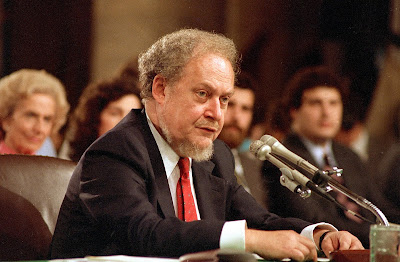 Bork, during his confirmation hearings

For those who may not remember, or may have never heard about it, the salient event in the entire career of Bork was the so-called "Saturday Night Massacre."  Briefly, as described by Wikipedia,

"The Saturday Night Massacre was the term used by political commentators[1] to refer to U.S. President Richard Nixon's dismissal of independent special prosecutor Archibald Cox, and the resignations of Attorney General Elliot Richardson and Deputy Attorney General William Ruckelshaus on October 20, 1973, during the Watergate scandal"


Cox was appointed by Richardson to investigate the Watergate affair; his appointment was accepted after he assured the Senate that Cox would be given a free hand to examine the evidence.

Cox subpoenaed Nixon for copies of the infamous Watergate tapes, when their existence became known.  Nixon offered one of the most hilarious "compromises" in political history; he agreed to let the tapes be reviewed by Senator John Stennis who, it just so happened, was, at that point in his life, nearly deaf.

Nixon then turned to Robert Bork, who was at the time the Solicitor General.  Without apparent qualms, Bork fired Cox, after being brought by limousine to the White House and being secretly sworn in as acting Attorney General.

Well, that's the story.  Given his moment on the national stage, in an affair of staggering importance which led to the only resignation of a President in our history, Bork placed his personal career ahead of the rule of law, the Nixon administration's honor, and the welfare of the United States.

At the time of Reagan's attempt to get Bork on the court, I believe, the Democrats really failed to articulate the full force of this argument, but it is clear to me that, of all people in this country, Bork, however brilliant and versed in the law, had demonstrated himself to be uniquely morally unqualified to sit on the court.  Once in a while, Congressional Democrats rise out of their stupor and do the right thing; this is an example.
Posted by Green Eagle at 7:20 PM

I think I smell a special Scalia-themed Wingnut Wrapup coming...

Isaac, I sort of have to go to the places that the wingnuts do, as (sorry to say for the country) I don't make this stuff up. Right now, I feel like we are never going to hear another word from anyone on the right between now and the election.

WOW - thanks for that reminder. I had forgotten all about the Bork Barrel BS. This, I think, is going to be one of the most contentious, lengthy and divisive appointments in a very, very long time. Simply because of the "block Obama at all costs" attitude and their current weight in Congress.

I seriously doubt Obama will be making the appointment.

What has Bork got to do with the present constitutional argument about appointing Scalia's successor?

Don't know much about the history of Supreme Court appointments, do you, Anonymous?

I do, smart ass, the question remains. You have proven your partisan hack credentials, now answer the question.

Bork will be held up as an example of Democratic obstruction, but, as you can plainly see, Bork was not suitable for the bench.

The answer, anonymous jackass, is "not much", so remember that when an endless stream of Republicans insist they are only doing what Democrats did to Bork over the next few months.

Mr. Bork was duly nominated by President Reagan and the Senate provided advice and consideration of the appointment. Mr. Bork's decision when confronted with one of the most critical Constitutional crises in American history was severely lacking. Perhaps a more appropriate nomination by Reagan could have been either Richardson or Ruckleshaus who both exhibited true moral character in the manner with which they handled the orders of President Nixon

Mr. Bork was duly nominated by President Reagan and the Senate provided advice and consideration of the appointment. Mr. Bork's decision when confronted with one of the most critical Constitutional crises in American history was severely lacking. Perhaps a more appropriate nomination by Reagan could have been either Richardson or Ruckleshaus who both exhibited true moral character in the manner with which they handled the orders of President Nixon

Richard,
Thanks for the informed comments.

It's just amazing, the ability right wingers have developed to ignore what is right in front of their faces.