The State of Madness Today

I have not been posting much right wing garbage lately, because it has seemingly all converged on a single stupid narrative, and there are only so many laughs we can get out of the same jokes over and over again.  However, today I would like to present you with some excerpts from a single article, the contents of which have appeared at a number of right wing sites lately, and which I think is an excellent summation of the current state of their "thinking."  As usual, I cannot resist a few reflections of my own along the way.  So, let's get started:

Because of course it is.  I just wish the storm would hit L.A. already- we could use the rain.

"The Earth is now under Military Law – the biggest military operation in history – with troops of 17 Nations under leadership of General Flynn fighting for the liberation of Humanity."

Because of course 17 nations have placed themselves under control of a criminal ex-general who also happens to be a deranged lunatic.  And because nothing says "the liberation of Humanity" like military law.

"The Military counted watermarked ballots of the 2020 Election and found that Trump won by an over 80%."

Because of course the military counted the ballots.  Don't they always do that?

"A scripted movie by the Alliance has been playing out ever since for the purpose of liberating The People of the earth from the Cabal."

It's funny, but one of the explanations they give that Trump's humiliating defeat is not real is that it's all a "movie."  Not one anyone in Hollywood would work on, I'd bet.  They'll do just about anything for money, but even this is too stupid for them.

"Biden was arrested and an actor took his place to be inaugurated President of the Cabal’s US Corporation on a fake White House movie set in Hollywood. “Stolen elections have consequences. Everyone involved will get what they deserve. The Biden Administration was on their final legs. This was the beginning of the end.” …JFK Jr."

"On 24 Jan. 2021 at 2:00 am EST Donald Trump was inaugurated President of the Republic of the US, not the US Corp. https://t.me/komorusan714/3201 The Military answered to Trump and the actor Biden was not permitted in the Pentagon."

What's Republican lunacy these days without a heaping helping of Sovereign Citizen bullshit.  Notice that (against my usual policy) I have left a link to a right wing site here, as it has the name "Komorusan."  Remind you of any country you might have heard of once or twice?  Well, anyway, here is what you get when you click on the link: 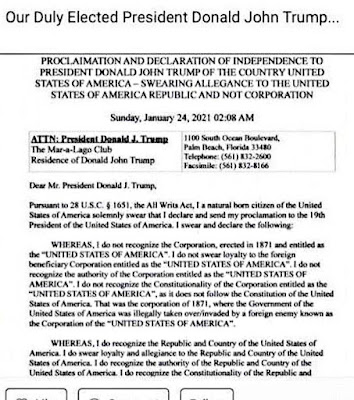 This image was pretty bad, so I took it into Photoshop and sharpened it up so you could read it.  It says just what you would expect, so I won't add any comments to it.

Apparently, moving vans at the White House mean Biden is moving out, not that supplies for Christmas celebrations or anything are arriving.  Well, proof is proof.

"The Global Currency Reset actually began in earnest last Sunday 21 Nov. when the Kingpin of the GCR – the Iraqi Dinar – went international."

I see all the time among Q idiots that the Iraqi dinar has replaced the U.S. dollar as the world's reserve currency, because naturally all the nations of the world have come together to bet the safety of the international economy on the currency of one of the most unstable countries on earth,

"The changeover of countries across the globe from Cabal rule to independency would happen with a Military takeover of the Mass Media through the newly installed Starlink Satellite System. The Military could then broadcast Real News to the world population and oversee new and transparent elections – the trigger for which was said dependent on a worldwide Event, suspected to be a global markets crash – which appeared to happen on Fri. 26 Nov."

Yeah, when the Dow fell 900 points in a day- a drop in the bucket compared to the numerous collapses of the Dow that happened under Trump.

"Mass arrests on over 500,000 sealed indictments filed in federal courts across the nation had been going on since June 2021 when CIA echelon were taken into custody to face charges in Military Tribunals that included colluding with foreign governments to interfere with the 2020 Election."

"It was said that GITMO was full and prisoners were being taken to Iceland and an island off the coast of California."

It was said by whom?  With what evidence?  No word on that.

"...the evil perpetrators, especially those engaged in the satanic mutilation & murder of children, will be obliterated."

Yeah, it's that again.

"Walmart has been used as a massive front for the trafficking of children. Walmart is involved with the Clinton foundation Evergreen Corp which needed a cover for product in those shipping containers. Remember the Evergreen Ship blocking the Suez Canal? Over a thousand trafficked children and dead bodies were rescued out of shipping containers in the Suez Canal by US Navy Seals...The Seals also found Weapons of Mass Destruction on the six story high vessel – which were believed destined to start a war in the Middle East."

Another bullshit lie that we have been hearing for years now.  And of course, here comes Covid.  Can't leave that out:

"The new (Covid) variants coming out are Military codes. Each variant signals Military operations and White Hats chess counter movements. Pay close attention to the new variant OMICROM   OMI= ODIN (Omi is one of ODINS name) CROM: is a commanded to an operating system or server for a job that is to be executed at a specified time.

Is that lunatic enough for you?  And finally, on to God:

"The sons of God lost control of Creation due to the worthless concepts of spirituality that the hybrid human serpent seed bloodlines created for us.

Trump was born to complete the task that Jesus started. He knew the time would come to answer his calling to stand up and step in at this time in human history. Trump is not bound to any religious indoctrination and therefore he’s totally receptive to what has to be done so that our Heavenly Father’s will is done on earth as it is in Heaven."

It’s the cleansing and rebirth of our Earth. It’s the “Second Coming”

Donald Trump is the second coming of Jesus.  Because what else would Jesus come back as than a narcisstic bully who has committed just about every crime on earth?

"It’s about ending what has plagued our earth for thousands of years."

Stupidity?  No, I don't think that is what they mean.

"The nephilim hybrid human demonic race feed on our children and through the abduction scenario, took our children to D.U.M.B’s to experiment, torture, extract adrenochome, traffic and genetically modified themselves to look like us. The nephilim are no longer the giants of old with two rows of teeth with six fingers and toes."

"They’re the new men of renown who control all governments on earth which allows them to do their evil degenerate activities, genetic experiments and satanic rituals underground."

Okay, this is only about a third of what is in this article, but I guess it's enough.  I would like someone to explain to me how we are supposed to reach an understanding with this ignorant, vicious mob.

Eva Wilson said…
I have read so many content on the topic of the blogger lovers however this piece of writing is actually a nice paragraph, keep it up.

Isaac said…
I've heard the saying that we fear that which we don't understand. Since people who swallow this kind of crap understand nothing, they fear everything.
December 2, 2021 at 2:58 PM

WesinCle said…
Love these! Its CRON not CROM, its pretty easy to find that with a simple trip to The Google Giggle.
December 3, 2021 at 9:11 AM

Lady M said…
Looks like the Wingnuts have been writing Trump fanfiction again.
December 5, 2021 at 8:26 PM

Anonymous said…
We're going to feel really silly when all of this happens. Do you think it will be before or after the Rapture?
December 6, 2021 at 7:39 AM