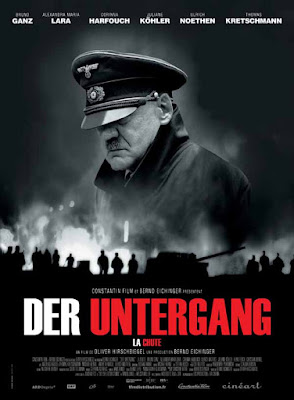 Known as Downfall in English, this is a film depicting the final days of Adolf Hitler's life, as Germany collapsed around him. As far as I can tell, it is a quite accurate depiction of life in the Hitlerbunker, as well as quite a movie.

I am sure that there is hardly a person in existence that has not seen at least a couple of parodies of the scene from this film where Hitler dissolves into a shouting maniac, so most people are aware that it exists, but not that many have seen it.  In the film we see the combination of Hitler's descent into delusion combined with his intent to damage the German people in retribution for their having "failed" him.

This was an outstanding historical movie under any circumstances, but in the last couple of days it has taken on a frightening relevance to Americans.  If you have never seen this film, or even if you have not seen it in a long time, I urgently recommend that you watch it.  It is widely available online, in some cases for free.  The parallels between Hitler's decline and the way Trump is now acting are deeply disturbing.

In a spirit of full revelation, I worked on a movie directed by Oliver Hirschbiegel, who was the director of Untergang.  I formed a pretty high impression of him.

I have this movie and I've watched it multiple times, and I can second the recommendation. It does an excellent job of evoking the doomed, morbid, feverish atmosphere of the time.

As Hitler becomes increasingly deranged and cut off from reality, his fanatical supporters double down on killing people for any trace of real or suspected disloyalty, while the military leaders argue among themselves about whether to defy him and try to salvage the situation (although in reality it's far too late), but ultimately just dither and do nothing until after he commits suicide. It's bizarre behavior but believable given the situation.

The movie would be depressing and upsetting, were it not for the fact that you know the characters suffering through all this were among the most evil people ever to exist.

As Richard Evans discusses in the second volume of his epic work on the Nazis, the German generals knew before the war even started that it was a doomed effort, but the combination of their severe Prussian military indoctrination and their susceptibility, like so many others, to Hitler's strong man act caused them to do nothing. Another similarity with the Trump reign, in which the same thing happened.

Have seen this and highly recommend it. It is available on the streaming service Hoopla (look up Hoopla - free and well worth a library card). It reminds me, in a way, of the WH bunker mentality.

Well, that was the point I was trying to make. Not very likely that Trump will be committing suicide anytime soon, but he doesn't have Soviet tanks on his doorstep either. Of course, if Trump thinks Vlad will treat him any better than Joe Stalin treated Hitler, he doesn't understand how little power you have when you lose power.