A Kentucky pastor who starred in a reality show about handling snakes during church services, died Saturday night after a fatal snake bite, police said.


Coots was bitten at the church at 8:30 p.m. but died at his home two hours later, after refusing medical treatment “because of religious beliefs,” Miller said." 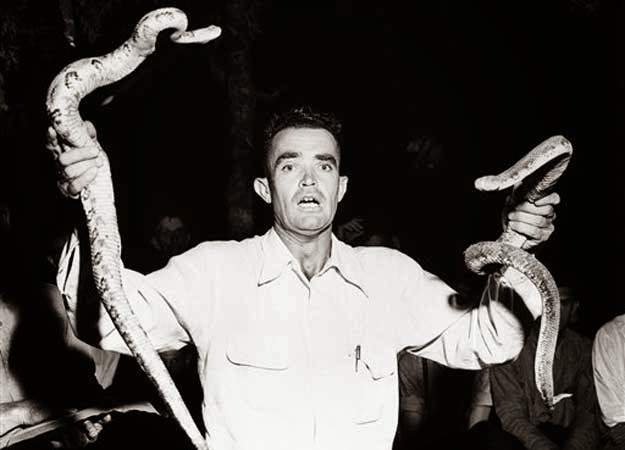 Not our dead guy, just some other self-destructive moron
who thinks he knows more than all the rest of us.

Listen, I have exactly as much sympathy for this subhhuman specimen as I have for the idiot who was teaching a suicide bomber class last week and managed to blow himself and his whole class to kingdom come.  They were both religious lunatics who are coddled by their society into thinking that they have a right to be as stupid and vicious as they want, as long as they claim that their religion told them to act that way.

But why in hell are they pandered to by our mainstream media with a TV show?  Just like the disgusting right wing gun nuts on Duck Dynasty, the crude, stupid people on the Honey Boo Boo show, the "sister wives" who are made rich because they are doing something which is a perverse denigration of women, there seem to be no right wingers so degenerate and vicious that they can't be paraded in front of the country as having made some sort of really interesting and valid choice about how they live their lives.

This is part of the insane coddling of the right in our country that allows patent idiocy like global warming and evolution denial to be forced on us as equal choices to the truth; that makes it a legitimate choice to kill abortion doctors, or teenage black kids carrying a soda; that allows them to be perfectly comfortable with shoving ignorance and stupidity down our throats until we give up in the face of their endless tantrums and just let them have their way.

I only wish every one of them would play with rattlesnakes until they are bitten.  It seems to be the only way to get them to leave us alone.

Infidel753 said…
This is what's known as natural selection in action. (And the same goes for the suicide bomber class.) I didn't know he had refused medical treatment too. For people who don't believe in evolution, these guys are sure eager to give it a chance to operate.

Aside from everything else, their practices are cruel to animals. What do they expect a snake to do when it gets picked up and handled by another animal much larger than itself?
February 17, 2014 at 2:35 PM

Magpie said…
“why in hell are they pandered to by our mainstream media with a TV show?”

Because it’s vitally important that people are kept distracted and dumb and freak shows are very effective at this. A lot of freaks want the attention and they are cheap.

If people are not fed an endless diet of non-intellectual drivel then they may end up becoming genuinely curious and start drilling through to how their world really operates and God forbid THAT happen.

I’m not talking a grand design conspiracy theory – just a tedium and mediocrity of convenience.