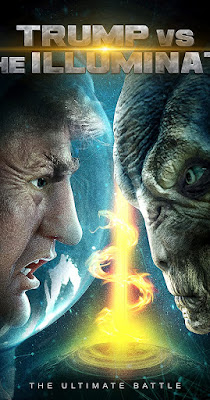 It's a real movie, in some respect, and it was just released in the last couple of days, and seems to be just about as good as you would expect.  Just about as much chance of winning an Oscar here as Trump had of getting the Nobel Peace Prize.  As in, those old duffers in the Academy have made some big mistakes over the years, but not that big.  The story seems to revolve around a clone of Donald Trump a thousand years in the future, because, I guess, at this point even his real fans know he can't even beat Joe Biden, let alone a galactic conspiracy of terror.
Posted by Green Eagle at 3:48 PM

ZOMG It does exist, or at least a trailer does. Seems to be somewhat tongue-in-cheek, but the Trumpanzees might make a cult classic of it nevertheless.

2 minutes of my life down in flames.

I just want to add that whoever did the voiceover for that trailer should receive life without parole for that imitation of Don La Fontaine.

I'll never understand why they have to pick the most hideous man in the world too represent humankind...