A Dog Whistle So Loud That It Could Deafen Anyone 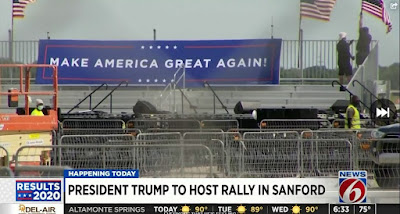 Preparing for another hatefest.

Here's an incident that has receded so far into the past that it is almost forgotten.  When Ronald Reagan ran for President in 1980, his first major appearance after he was nominated was in Philadelphia, Mississippi, where he gave a speech strongly supporting "States' rights," which of course everybody knows is a euphemism for segregation.  Philadelphia Mississippi happened to be the location of the KKK murder of three civil rights workers sixteen years before, but of course Reagan denied any connection to that event.

Well, today, Donald Trump is reopening his campaign to be re-elected, at a rally in Sanford, Florida.  Some may remember Sanford as the site of the unpunished racist murder of Trayvon Martin. But Los Angeles Dodgers fans have another reason to remember Sanford.  In 1946, Sanford was the spring training home of the Montreal Royals, a Dodgers minor league team.  That year, Branch Rickey, the president of the Dodgers, who was determined to break Baseball's color barrier, drafted a young black player by the name of Jackie Robinson and sent him to the Royals.  In Robinson's first game, the local police chief showed up and ordered Robinson out of the game, with strong support from the local crowd.  Robinson had to comply, as the team feared a riot.  After this, the Royals left Sanford, and that was the end of Sanford's role in major league baseball.

Sanford is a notoriously racist city in one of the most racist States in the country.  Is there anyone who is so naive as to think that Trump's choice of Sanford to reopen his campaign was merely a coincidence, any more than Reagan's choice of Philadelphia, Mississippi was?

The Republican party has been racist for decades, and this is but the latest example of them proudly displaying that racism for the world to see.

They threw Jackie Robinson out of a baseball game? Serves them right that the team left. Sounds like just the place for Trump, though.

Little known facts in Dodgers History. Check it out- it really happened.