I couldn't take it.  And this is from someone with the stubbornness to have memorialized over ten thousand specimens of wingnut lunacy at my blog.  But this was too much. Every Republican lie ever heard, just repeated more often.  I lasted about half an hour and gave up.  Well, there was a TV going in another room and I happened to walk in on Melania's speech, which I tolerated for exactly eight seconds before switching to the newest episode of Capitaine Marleau.

Anyway, I know this graphic from Daily Kos comes from yesterday, but it so perfectly expresses everything about the Republican convention in one glance, that I can't resist stealing it: 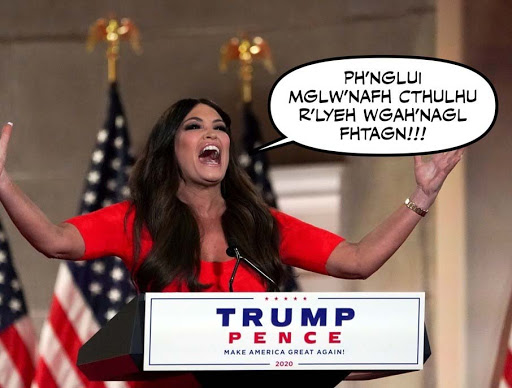 Infidel, I know that you in particular will understand what I am saying here.  Or at least what she is saying.  Thank heaven she apparently didn't get the pronunciation quite right, so we won't have to bear with Cthulhu actually appearing until day four of the convention.

And let me just end by adding that the greatest thing about tonight's Republican Convention lineup was who wasn't there- the lady who was cancelled at the last minute because she linked to a post today approvingly recommending the Protocols of the Elders of Zion.  And just to put the cherry on the sundae, she is on the board of directors of the build the wall scam in which Steve Bannon was just indicted for bilking wingnut suckers out of a million dollars.  You just couldn't make this stuff up.

Cthulhu would honestly be an improvement at this point.

I understand Miskatonic University has sent an expedition.

Sad to say, Gruaud, we all know how Miskatonic University expeditions always turn out.