You know, politics in this country has come down to nothing but a vain attempt to combat the evil lunacy of the right.  I've come to hate a lot of what I read from the right (well, okay, I always hated it) but it's what our country is about today, so here's another load:

That would be the people who elected a convicted criminal to be their governor.  Oh yeah, we should pay a lot of attention to what they think.  Anyway, Town Hall was wrong.  It turns out they liked the pizza guy better.  Go figure.

Oh, you already know what that is.  It's anything that makes corporations do anything they don't want to.

Yes, a total failure that has only seen the removal of two long-time dictators in Middle Eastern countries at practically no cost to us and without making the rest of the world hate us.  Compare that to the mighty success George W. Bush gave us Iraq, at a paltry cost of two trillion dollars.  Now, there is some really great Middle East policy, yes sir!

Right, because all Jews know that there is no such thing as right wing antisemitism: 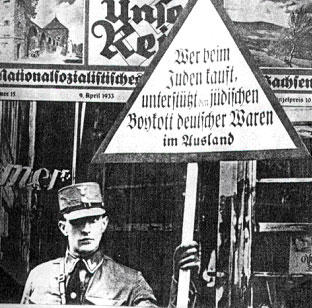 And now, another in the Republican supply of Scandals that Aint Going Nowhere:

Yes, our President waved while someone was taking a picture of him.  The disgrace!

Not TALKING about it, Cynthia, LYING about it.  That's what we are calling morally indefensible.  A little difference there.  Think about it.

That would be the requirement to have her picture taken for her driver's license.  Lady, I hate to break it to you, but that lawsuit ain't going anywhere.  Boy, you can sure see why stories like this are "exclusive" to World Net Daily.

Hey, you know what, Randall?  You're right- you ARE a stupid idiot.  Happy now?

Because they're decent people, and not a bunch of racist, greedy dicks like you guys?  That's my guess, anyway.

Sissy Willis, SISU:  ""It was one of those great, only-in-America Judeo-Christian moments," Senator Joe Lieberman told a delighted American Enterprise Institute audience yesterday evening, retelling the tale of a fateful meeting between him and Sarah Palin on the eve of her vice-presidential debate with Joe Biden October 2, 2008"

No, but he might make a good White House pizza chef.

Diane Ellis, Ricochet:  "What If the Marines Opened Up Recruitment to Gays and No One Showed Up?

Boy, I guess that would make you people feel pretty silly for spending twenty years screaming about how gays would destroy the military, huh?

No, Aleister, they have another choice:  they could grow up.

Good point there, Dan.  And Dan has the chart to prove it, too: 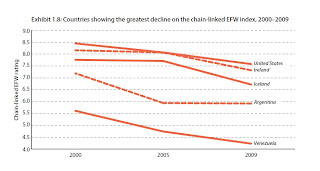 See?  Point proven!....Wait a minute....this chart ends in 2009.  Now hold on...Wasn't that the year something important happened?  Oh yeah, that's the year Obama became President.  So actually, it only covers Bush's time in office.  That Obama...just like the Shadow, I guess he had the power to cloud men's minds, even before he was president.  Although, clouding Bush's mind wouldn't stand as much of an accomplishment.

Horrible! And here, I thought government employees worked for free.

And now, let's take a look at some classic right wing "humor:" 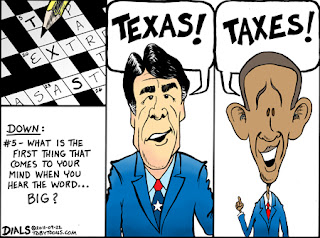 No mention, of course, that the current Federal tax rate is the lowest since 1950, or that Rick Perry paid for Texas' $17 billion deficit with Federal stimulus money.  Oh well, what's the difference?  Rick Perry seems to be history now, just like all of the other Republican saviors we've seen this year.

Well, thanks for keeping it simple, Bob.

Actually, Jim, he released them a long time ago.  Deal with it.

Jim Hoft, Gateway Pundit:  "Another shining moment in the history of American liberalism...Bristol Palin was out with friends at a bar recently. After she fell off a mechanical bull some leftist screams, “Your mother’s a whore. Did you ride Levi like that?”

Because there's nowhere you are more likely to find a liberal than in a bar with a mechanical bull.

Because we've never had one.  The were ALL Muslims, I guess.  Except for Ronald Reagan, of course.  And Nixon.

Ha-ha. Mechanical Bull is of course the best story, and a pretty good description of Republican talking points.

My question is: if you raise taxes on corporations, what incentive will they have to make money?

Maybe just to spite us. Hell hath no fury like a CEO scorned.