The Duties of the President

As amended yesterday by the honorable William P. Barr on September 8, 2020

To serve as commander in chief of the military

To sign bills into law or veto them, as he sees fit

To appoint cabinet members and judges, subject to approval by the Senate

To see that the laws are faithfully enforced

To lie and smear a woman you raped before you became President, in order to destroy her reputation and serve as a warning to any of the other women you raped that you will do the same to them if they open their big fat traps. 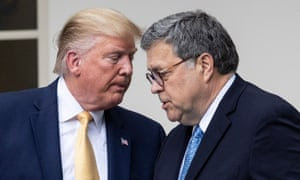 Trump and Toady plot to undermine the rule of law

I bet you weren't aware that Attorney General Barr added that last one to the list, but he did:

"Yet again, Bill Barr proves that he is the perfect Attorney General and personal attorney for Donald Trump...Bloomberg is reporting that the DOJ, which is supposed to be an unbiased, non-politicized justice seeking department, is trying to take over Trump's defense, effectively pitting itself against an American citizen. And the taxpayers would be paying for this defense...Trump was due to give a deposition and provide a DNA sample to compare to DNA left on a dress Carroll was wearing at the time of the attack.

Bloomberg reports that in the court filing, the DOJ said that - are you ready for this - that Trump was "acting within the scope of his job as President" when he allegedly defamed Carroll. They also asked to move the court to Manhattan *federal court* from New York State Court. So they want the case to be Federal (where Barr can oversee it and, most likely, kill it) versus State Court, where Barr has no jurisdiction and Trump could be indicted while in office."

Which should, if nothing else, put that DNA test off until well after the election.  Given that, if Trump is innocent of this rape as he claims, the DNA test would exonerate him, it is strange that he is fighting with every ounce of his strength to prevent the test from happening, but this new strategy is an escalation in malignance.  Trump is claiming, and his Attorney general is supporting him in that claim, that lying about a violent crime he committed before he was President is a legitimate part of his Presidential duties.  If he and the Attorney General have so far eroded the rule of law that they get away with this, who pays for his defense is the least of issues, because they could then make a defensible claim that he cannot be sued for acts taken in pursuit of his Presidential duties, and Barr could immediately dismiss the case on his own authority.  And it would then be inscribed in our nation's laws forever that hiding criminal behavior is a legitimate right of the President. 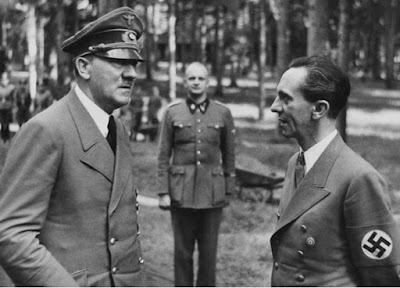 Two random figures from history.  I had this photo lying around,
and thought I would stick it here, just for the hell of it.

This is not a random act of desecration which Trump and Barr are carrying out.  It is part of their long term plan to turn the President into an uncontrollable dictator, answerable to nobody but, apparently, foreign tyrants like Vladimir Putin.  Its implications start to reach the scale of the enabling acts of 1933, which paved the way for dictatorial rule in Nazi Germany.  Any person at this point who cannot see the clear direction this is heading is a fool.

This will make you feel better:

"I don't think I remember a more memorable retrograde station than what we experienced yesterday (9/9/20). Both Mars and the Black Moon, within a couple of degrees of each other, went retrograde simultaneously, and boy did the world turn around. It's almost as though the planet began spinning in the opposite direction. I mean, fire all over the west coast, and earthquake in New Jersey, not to mention all the breaking news that was revealed yesterday courtesy of a brand new whistle blower and Bob Woodward and his newest book. Woodward's books have taken many a politician down, and the timing of this one, with all its revelations, is very powerful indeed. This is especially so when you consider that this is just the BEGINNING of the retrograde journey." The Cosmic Path

When will the Bar Assoc. show some spine and disbar Barr?
They seemed more then eager to do that to progressive woman AG in Penn.
But I guess white old males are immune to having their conduct policed by a trade association.