"Republicans are seriously considering a Doomsday Plan if fiscal cliff talks collapse entirely.  It’s quite simple:  House Republicans would allow a vote on extending the Bush middle class tax cuts (the bill passed in August by the Senate) and offer the President nothing more:  no extension of the debt ceiling, nothing on unemployment, nothing on closing loopholes.  Congress would recess for the holidays and the president would face a big battle early in the year over the debt ceiling.

Two senior Republican elected officials tell me this doomsday plan is becoming the most likely scenario." 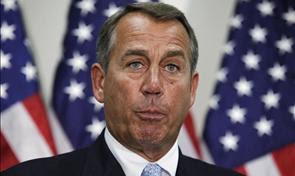 Intransigence- the face of the Repubican Party

Brilliant.  Here, apparently, is their strategy:  Let Obama have a huge victory with the middle class, and rather than be a part of it, make sure that Democrats can tell the country for years that they did it without a shred of Republican support.  I can't think of a thing that could make it more clear who is on which side in this country, and which party is trying to solve problems and which sees everything as nothing but an opportunity for partisan gain.

I can't tell you how happy it makes me to see that the Republican party has learned exactly nothing from the recent election.  There is no better way to insure that they pass, unlamented, into history.
Posted by Green Eagle at 10:01 AM

But, they lost the election. surely, we can negiotate?

The Republican Party is filled with vicious evil troglydytes and racists.